This morning we paid a vist to nearby Ile Bizard nature park (33 species – more of this later), but while having the morning coffee we were delighted to see that the garden had been visited by a pair of Rose-breasted Grosbeaks ….. the fist of which was this fellow: 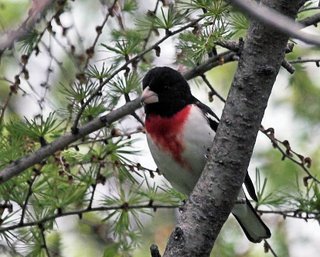 ….. but then his friend appeared, and as can be seen in the following image his colouration was most atypical. We assumed at first that this was a juvenile just coming into its adult colouration but if that were the case there should be distinct streaking on his flanks which this fellow does not have, similarly the white patchiness would not fit either. We have done some checking around and RBGRs do show variations in plumage colouration with red being exchanged for orange, but rarely quite so markedly so as this. 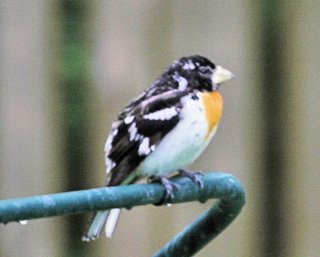 Also seen – and only mentioned here because we got some nice photos, were American Goldfinch and also Northern Cardinals …… 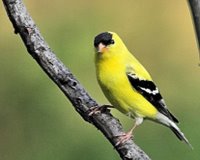 And so, after that excitement we betook ourselves to Ile Bizard where we tallied 33 species, including Sora Rail, Virginia Rail, Red-shouldered Hawk, Osprey, Hooded Merganser, Chimney Swift, Green and Great-blue Herons and a host of other goodies. The birds compensated for the grey skies, cold wind and drizzle – the coffee flask back at the car park helped also.