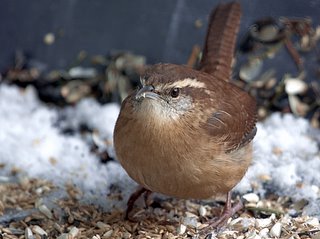 Bright and only a little cold after several inches of snow yesterday brought in a host of birds to the feeders today ……. including (one of) our friend(s), the Carolina Wren who really seems to be getting through this winteer in fine fettle, so far at least.

……. and during the day we managed a trip to the flatlands aorund St-Clet to take in another fine Snowy Owl.