The Sparroworks (the garden is full of sparrows making new sparrows) shares its turf with the Squirrelworks (the garden is full of squirrels making new squirrels) and interesting creatures these squirrels are. We have been quite impressed in recent weeks by two – a grey and a black-grey – in particular because of their seeming ability to survive difficulties we expected to see them off.

Stumpy somehow lost most of his tail, whether to owl-attack or a close encounter with a car we don’t know but he has merely a short and angrily waved stump in place of what should be a fine bush. Now, in theory squirrels need their tails to steer and balance as they leap and jump through the trees so we rather anticipated that sooner or later he would get it wrong and fall from great height but it hardly seems to hinder him at all as he dashes about and apart from this impediment he appears in fine fettle. Interesting.

Scabby on the other hand appeared with a really nasty suppurating wound in his back with raised edges and clearly evident necrosis. Not long for this world we surmised as we studied him through binoculars – opportunistic infection heading your way, sunshine was the prognosis. squirrel life is fairly germ ridden after all. However, this pathologist was confounded because over the period we have been watching him his would has gradually healed and he has put on weight. This should not happen but all we can think is that he has a cracking immune system – wish our cats had wound healing capacities so efficient, we’d save a fortune at the vets. 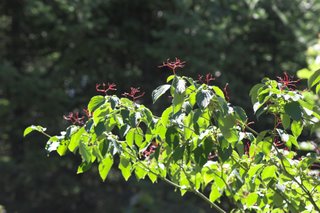 The Birds (have to get something about birds in here, after all) have gorged themselves on the bumper crop of berries from the Pagoda Dogwood tree we planted about three years ago and which has been growing remarkably fast. Dogwoods are nice subjects for the garden, not just because they are native and thus hardy and have colourful wood in the winter garden but also because after the birds have stuffed their stomachs the berry-bearing stalks stand upright and glow in the low morning sunlight as you can see here. 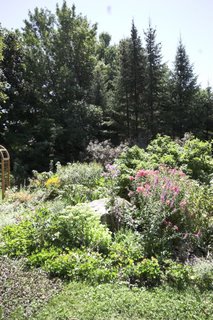 This is the “rock border”, named after that huge boulder that some earlier owner of the land found and dumped – probably when having the septic tank installed. We have filled it with a dense planting of shrubs and perenniels which are loved by the smaller birds who can find food and shelter in the cover they provide. A good place too to find various stages of Toad development – move a leaf and they often hop away into the shade again.