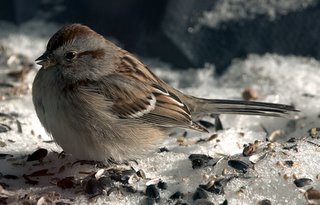 A much brighter and very cold day, today, brought more Goldfinches, but also the first American Tree Sparrow of the season (another tick for the year-list).

Late afternoon, a walk in nearby Ste-Anne-de-Bellevue took us past a
thick hedge near Le Surcouf restaurant that was filled with dozens of
loudly chattering House Sparrows. Coming back a quarter of an hour
later Jean and I both commented on the fact that all was silent when we
saw the reason for the lack of sparrows sitting in the hedge for a brief
moment before it took wing.

My first thought was “that’s a huge Robin” as my eye was caught by a
bright rufous breast albeit with apparently no pronounced streaking, I
then saw, face on, the tail with three broad dark grey stripes on a
paler greyish ground. I could not see the head at all because of a
branch in the way. This bird was within six feet of us – almost
touchable. I thought at first a Sharpie until it took flight, when it
seemed to have the classic falcon wing shape and I (re)thought “or maybe
a Kestrel – perhaps”. But it was skulking in a bush – not a falcon sort of behaviour.

In the time it was sitting there (not long) Jean focused on the head
that I cold not see, it had a distinct bright yellow eye (= accipiter) with white
markings around it and the head was quite small. When it flew off her impression of wing
shape etc was the same as mine – Kestrel. Nevertheless, having thought hard about it (and consulted an expert friend) we are decided on it having been a Sharp-shinned Hawk and just hope that it eventually found a fat sparrow for its supper.