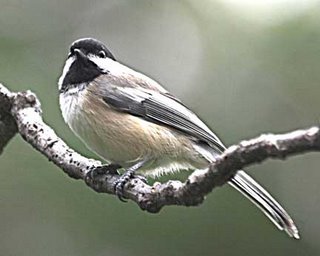 Next year is the 90th anniversary of Bird Protection Quebec …. one of the ways in which it is to be commemorated is the running of a major year-long birding competition, and guess who one of the organisers is? Rather than explain it all here, I suggest that you check out the details at the BPQ website ….. click here.

Close by on Ile-St-Helene this week a Black-throated gray warbler and a Worm-eating Warbler have been showing to the great delight of those able to take time off from work to go looking for them. real wanderers and far from home ….. we got the BTGW as a lifer in Arizona which is where this one ought to be right now. Took a wrong turning somewhere! However, from reports we have heard, Saturday morning saw large crowds of jostling birders descend on the place trying for these birds – glad we didn’t bother, can’t abide crowds.

The annual “Feederwatch” season starts this weekend …… every week from mid November to next spring we shall be counting the birds in our garden as part of one of our contributions to Citizen Science. Find out more at http://www.bsc-eoc.org/national/pfw.html and then sign up as a feederwatcher yourself.

“Feederwatch” got off to a good start with the early morning appearance yesterday of a Sharp-shinned Hawk – always a nice bird to have visiting were it not for the fact that since it put in an appearance we have seen little else in the garden. The photo had to be snatched at a distance, cropped and tweaked for publication ….. but it’s easy enough to ID the bird from this even if I wouldn’t hang it on the gallery wall. 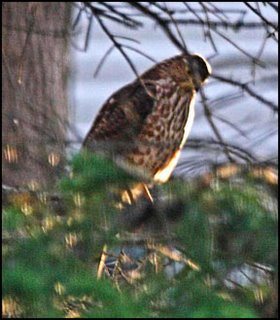 Today we had two pairs of Purple Finches which were a surprise – we had three visits in winter 2002 and one in thew spring of 2004 but other than that they have tended to avoid us. Other feeder eaters we managed to capture images of have been a pair of Blue Jays ….. 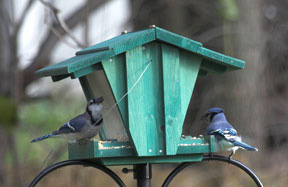 ……. and the inevitable Squirrel and gang of MODOs.