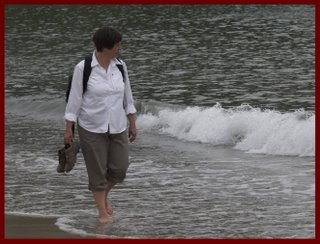 Back to birds again – well birds do feature in this tale, but so do good meals and some fine wines and some excellent scenery and a grudging acknowledgement that once you take politics out of the equation there are one or two things the southern cousins do tolerably well. So – we took ourselves off for a long weekend in Maine and paid a visit to ßar Harbor which is tucked into the Acadia national park. A very long drive from Montreal – about 8 hours, but easy driving until the last 15 miles when it seemed the entire population of the Usa was trying to get over the access causeway at the same moment.

Cracking good resto this first evening – called Havana : “modern American with a Latin twist” which meant some really inventive things with fresh fish, ginger, coriander and chillies. Not cheap but who cares when the cooking is that good ?

Saturday – plenty of local walking with camera and bins interspersed with rock pools and paddling for J who was suffering from salt water deprivation. 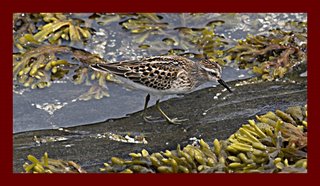 Dinner was very nearby in Maggie’s Resto – wonderful fresh ingredients, mostly fish as you would expect but no absence of flavor – sadly they missed getting all the stars as they could not provide espresso coffee …. In fact.the coffee was regular USA-watered down in a thick walled mug. Ah well, its not Quebec.

Sunday we awoke to tremendous rain, a right blatter. ßy noon it had eased off a lot and we visited the rather splendid Acadia National Park. An altogether excellent mixture of sea, sand, rocks and forested mountains. Looking through the scope at a colony of Cormorants J overheard someone musing about the large number of “OTTERS” and could not resist helping their education – luckily they took it well.

Later, while scoping a rather muddy lake while everybody else was facing exactly the opposite direction going gosh at the views (which were fabulous ) we enjoyed a small group of either Laughing or else Bonaparte’s Gulls (we wondered long and hard about Black-headed Gulls as did another border we met there but statistically they were probably BGs or LGs) and a splendid hover-and-dive display from a ßelted Kingfisher.

Final dinner in a pub with local beers and “elevated” pub-grubwas well up to standard.

When Americans learn to make coffee they can join the civilized world – but the final opinion is that Maine and Acadia merits repeat visiting. 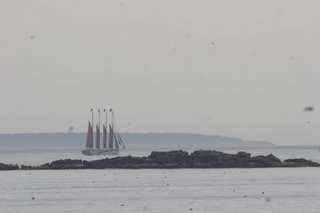